Kickstarter isn’t what it was. Back in 2013, the pitch “Dungeon Keeper in space” garnered Maia £140,000. Skip ahead three years and another charming pitch – “Dwarf Fortress meets Elite” – barely scraped £10,000. That’s absolutely no reflection of the quality of the product. After all, despite being a one-man game, Sol Trader is well on course to hit its release window of June 2016 as a stable, intriguing game. It’s just a reflection on the changed times for indies; today, the determinant of success seems to be a tightening social web of ‘in’ indie developers and press, and its creator Chris Parsons isn’t part of that web.

Funnily enough, that web of relationships is core to Sol Trader itself, as Parsons explained to me. “Sol Trader aims to bring people and relationships front and centre to space gaming. There’s a lot of space games out there that try to create interesting infinite universes, but interacting with characters and people can often take a back seat.”

Parson’s shtick is to generate those NPC relationships – the previous 200 years of them, at least. When you start a new run, the simulation works out the social history of the entire solar system for two centuries, then lets you choose your place in that world by answering a few questions, starting by choosing your parents. 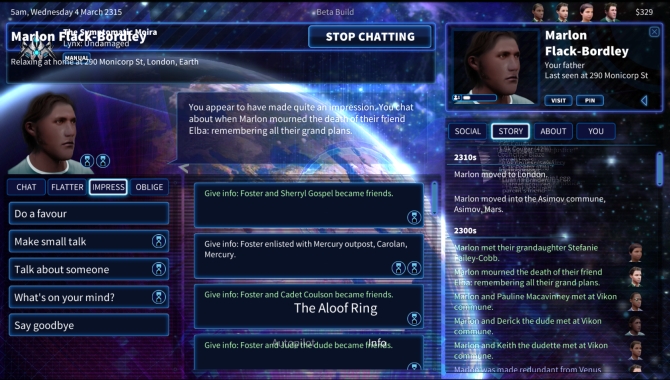 “The game starts with a few people in each city and steps forward each year.” He explains “Characters move through life stages, meet, make friends, fall in love, choose careers, get married, have children, and so on. Different careers cause different random events to happen, which affect character stats. These then feed into their future choices.”

Once you’ve established who you are, you can start choosing who you want to be. There’s no structure to the game at the moment, though Parsons is looking to introduce the choice of a basic goal at the game’s start, much like Sunless Sea – whether that’s to be President, to navigate the entire system or something much simpler, without any necessity to ever achieve it. “It’s fundamentally a game about exploration, where the contours of the world are relational not physical.” He says. 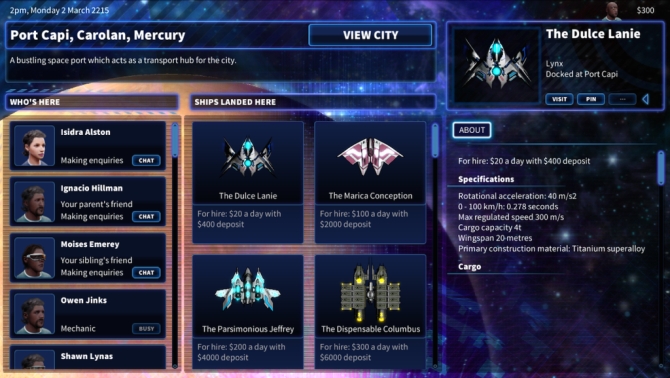 Playing Sol Trader, it’s in an interesting state, with elements feeling old but familiar like Space Rangers II, and other elements missing entirely – like combat. It reminds me most of old RPGs, like Morrowind, where all the interesting content is parcelled away in the cities, and fitting that the interface feels deliberately ten years out of date, in the way that Neo Scavenger’s does.

It’s also missing conflict. That makes it hard to judge the game, in its current state. Without combat, there’s little peril, and without peril, your social relationships aren’t as urgently important. There’s almost no cost to the game – your character doesn’t seem to need to eat, drink, breathe, sleep, rent a room, pay for fuel, or any of the assumed elements of a life sim.

The core social relations engine needs desire and conflict to work. Talking to someone in the world, you can take one of four different stances, which affect their relations with you, which in turn affects how willing they are to do a favour for you – like, unbelievably, lending you their spaceship. In a world where you actually need something, those relations would take on a extrinsic value that’s currently lacking.

But, yes, this is a futuristic world, where people seem to lend friends their spaceships like we do power tools. That reflects Parson’s underlying concerns about the story he wants his players to experience. “My main inspiration is the Star Wars universe. That sounds like an obvious cliche (isn’t everyone inspired by it?), but I do see Star Wars as distinctly different from other sci-fi universes. They’re fundamentally films about people and families, which just happen to be set in space. I wanted Sol Trader to feel like that – where in-game characters don’t give a damn that they’re flying from one planet to another, but they care very much about their friends and family.” 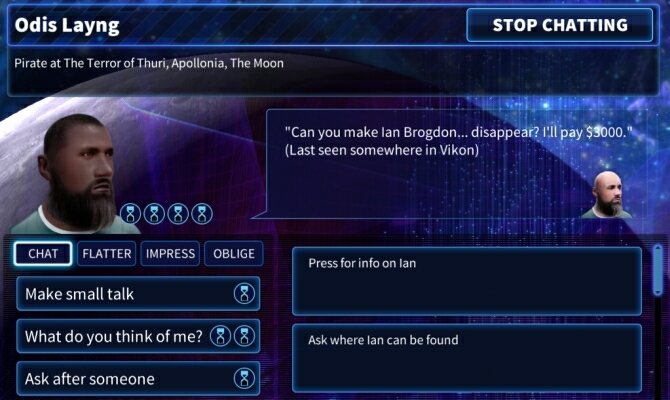 I know that’s how I felt about the game. Coming to life, like a clichéd amnesiac protagonist, I reeled through my personal history laid out on the screen – my layabout father, his affair with my businesslike mother, my birth, meeting my partner and having a daughter with her. And then, for some reason, I ended up as a mature student on Mercury, whilst they were on Earth.

They were my only core contacts – tokens in the game world that represented things of actual value to me – so I tried to reach them. I went to the local spaceport, but renting a spaceship was prohibitively expensive. Instead, I flirted with one of the local traders, who was a friend of my sister’s, and we soon became fast friends – fast enough that she loaned me her spaceship and asked me to deliver a package to her mother on Venus.

The whole interaction felt halfway to The Sims. “I wasn’t particularly going for The Sims,” says Parson “but you’re not the first to see the game in there. I’m probably heavier into the relationships and lighter on personal development. The game is ultimately a relational playground in a similar fashion.”

“Rather than players speeding through dialog with mindless vendors of items and missions, I wanted them to be able to get to know the characters they’re talking to, analyse their motives and pick up interesting hints and connections that they can refer back to later.” Indeed, blackmail and the gossip press are intended to be neat elements of the game, where NPCs will find out embarrassing negative information about you which they’ll threaten to reveal unless you do what they say – or make them disappear… 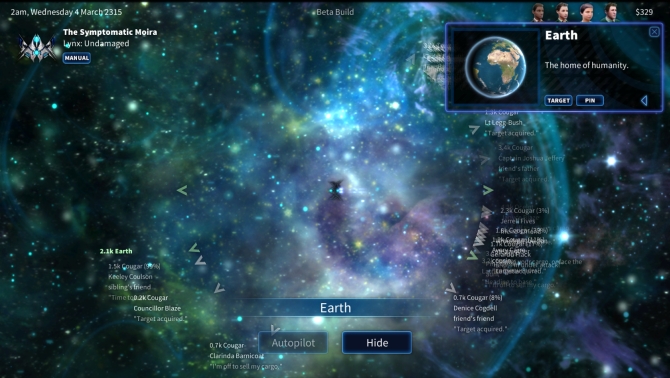 Having borrowed the trader’s spaceship, for an indefinite period, I delivered her package to Venus and then flew to Earth. At the moment, without space battles, the slow 2D interplanetary travel is empty and dull. When the game is complete, this will be full of pirates, other traders and contacts.

Landing on Earth, I couldn’t find my partner – she was between planets – but I found my young daughter. Who didn’t recognise me. That really, really hurt – but I wasn’t sure if that was designed or accidental. “I’m surprised she didn’t know you – sounds like a dysfunctional family… Not every child knows their parents. Did you divorce her mother? How old were you both? Sounds like you might have lost touch…?”

Whatever the situation, designed or otherwise, I’d argue the complexity of real-life human relations can’t be matched by a programmed rather than procedural sim. “You’re right in that it’s impossible to fully replicate.” says Parsons. “I’m trying to hint at behaviour at a high level and keep it consistent rather than filling in every detail. People have a natural storytelling bias which hopefully they’ll use to fill in the gaps in the simulation.”

At the moment, Sol Trader needs its gaps filling in. Even when combat and a wider structure is in place, it’s going to need a lot of work to match the systemic, mechanical complexity of its inspiration Dwarf Fortress – but then, that’s been in continuous development since 2016. If it manages to produce anything like that, it’ll be in good company.