The Witness, Five Years On; A Retrospective 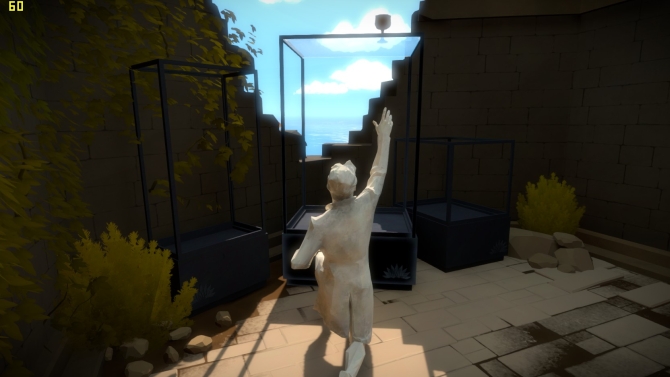 I first played The Witness way back in 2011, when I was working for Rock, Paper, Shotgun. I met Jonathan Blow above a London restaurant, and after he had worked out the esoterica of his dual laptop set up, I spent three hours playing the game, before Blow and I shared a pleasant interview and an intense evening meal.

Back then the game was puzzle-complete, according to Blow, and two hours (and an analytical brain) allowed me to plough through about a third of the 300+ puzzles. What was needed, he thought, was a new design – back then he had just hired some architects to design the buildings and landscape, and he had a brochure detailing the island, its timeline and so on. He thought it would take another year to implement that.

He was so wrong.

Five years later, he has let go and the game is out. There are now got 600+ puzzles and the world has been remodelled inch by inch. And this is the first time I’ve played it since then. So how does the game live up to the goals of 2011’s Blow? And was it worth the extra $5.2 million he’s spent on it since then…? (Warning: contains mild spoilers). 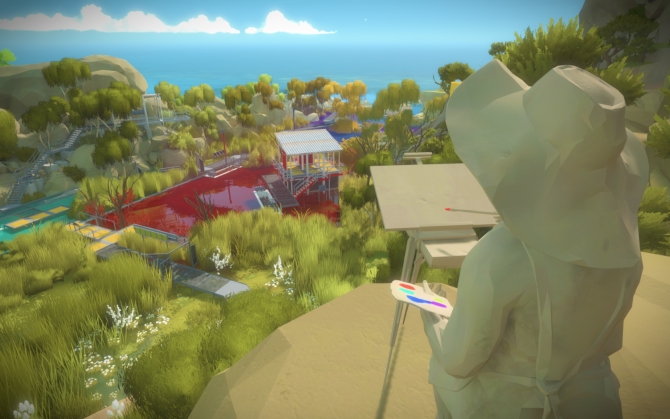 Starting the game, it’s immediately familiar and unfamiliar. I don’t remember this tunnel opening, but it’s in my previous preview as a ‘womb-like corridor’, so that’s the vagaries of memory speaking. Like the similar one in the opening of Silent Hill 4: The Room, it limits your movement so you can’t look round, but can only move forwards; a neat trick to inculcate curiosity in the player.

As I emerge, I can immediately see the improvements. What was at one time an empty and clinical office / sitting room has become a couple of caves and then something like a Romano-Spanish ruined castle courtyard, overgrown with foliage, that’s been adapted to be a lounging area. Previously it was an open compound with a rough floor, stringy bushes and a mesh gate. The gate has been replaced by some kind of energy grid.

That’s a big change but not a huge surprise because Blow presaged it in 2011; “ There’s been a structural history, so different civilisations have moved in and out, and old structures have been re-appropriated. So here, there’s a battlement wall, and it’s deteriorated and somebody’s built a modern home in the courtyard with a cared-for garden.” The layering, which wasn’t there in the 2011 build, works and gives the whole are an ‘old Italian villa rebuilt by rich layabouts’ feel to it. 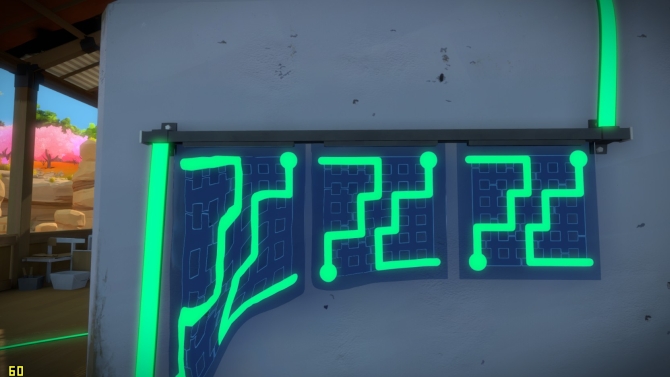 A bigger change is in the puzzle locations. Previously these were all connected together along a wall, to ease players into the concept of the connected cables being important for solving puzzles. I guess Blow assumes that’s now obvious from the way the cables glow when activated and the subtle thrumming audio cue when you’re near a cable. You’re also not going to get out of this area until you understand that concept, so he probably doesn’t have to worry about it too much.

Another big change is my shadow. When I played last time, Blow was using assets left over from an aborted project and my shadow was that of a space marine (complete with rocket launcher, if the asset files are to be believed) – now it’s a tall androgynous figure with the build and haircut of Kylo Ren. The only surprise is that the shadows are so rough – but I guess there are aesthetic limitations to every project. 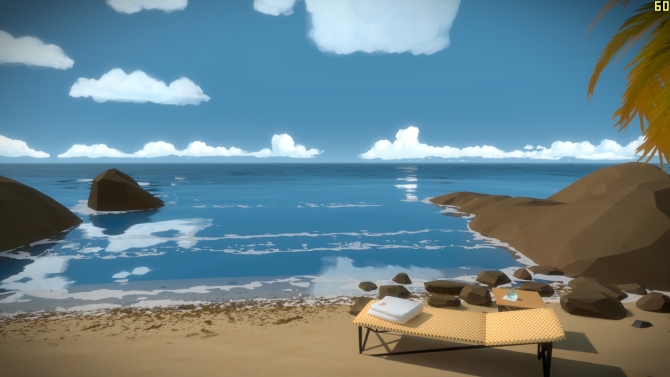 Exiting the area, I get another surprise. I’m fairly sure that, when I played the game all those years ago, there was a podium outside these gates with a narrator’s voice on it, explaining why we’re here. Instead, there’s just a ton more foliage. That narrator’s recording contained an explicit hint at your purpose on the island, so it’s odd that it’s gone so completely. Back in 2011, Blow said “Games’ bearing is usually very presentational and what they’re presenting to you is an entertainment story. Here the bearing is more about speaking directly, honestly and straightforwardly as possible. What is being spoken about is not so much an entertainment story… it’s really more of a serious story that has a philosophical bent to it.”

When I played last time, I went off piste, so I didn’t find many of the quotation locations – I found what Blow told me was a picnic, with the wine bottles and hamper represented by white polygons, and a recording of Richard Feynman talking seriously, at great length, about wine and fermentation. (I hunt through the undergrowth but can’t find it anywhere.) The quotes I find (in a hidden route behind the courtyard) do share that seriousness with the Feynman quote from my first play – but in the few hours I’ve played so far, I’ve not found a hint of that original story. It feels like Blow is just making the quotes and statuary talk for him, though it’s enormously indistinct. 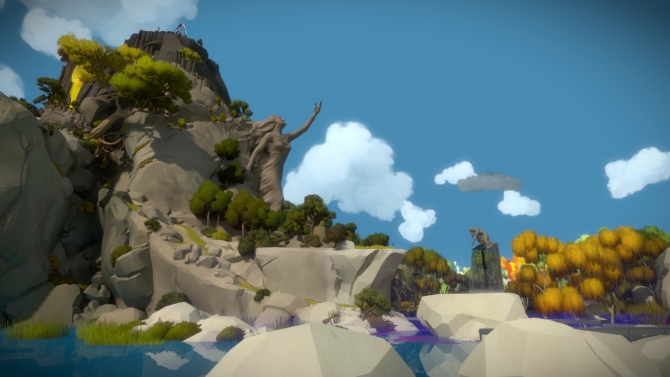 Further on, I encounter a place I do remember, which has changed enormously – what was a gazebo with puzzles inside is now an open-ended shed and a row of puzzles on stands are the same, supposedly to teach you a new puzzle concept. The puzzles haven’t changed enormously – not surprisingly, given their simplicity – and for all their challenge, they don’t always feel wholly wired into the world surrounding them. The treehouse section, in particular, proves to be endlessly frustrating, making you build bridges from iterated puzzle panels.

Back in that gazebo, I manage to solve the puzzles without grasping the concept at all, which is definitely not the point, and something that happens repeatedly throughout my explorations. I thought that six years of polish might have eroded this.

Further on I find what in 2011 was a ‘Tonka toy tower’, surrounded by hedge mazes, now some red fortress ruin. I recall that was one of the locations that unlocked a laser last time I played. When I asked Blow about it, he mentioned that you only needed to complete five of the seven puzzle sets to unlock the island’s central antenna. He explained; “You see, there’s some puzzles that people can’t do; so if you’re deaf, you can’t do the audio puzzles that you were just playing. It seems stupid to put in text captions like, “here are the notes being played” because there’s no puzzle any more. You can’t even adapt it, it just no longer works.” So that limiting factor wasn’t just for the intellectually-limited, but for those with accessibility issues. 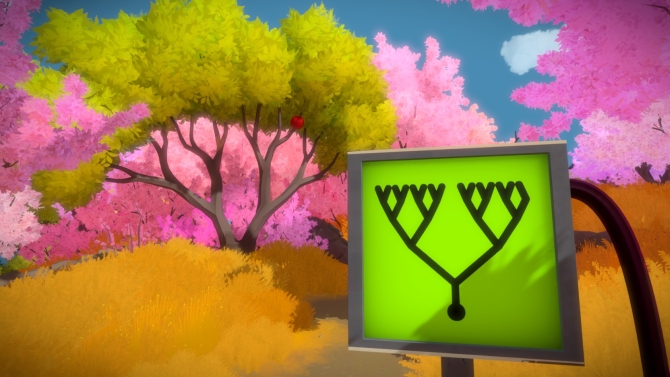 Now, it’s worth noting I’m colourblind. So I do find a set of puzzles that are a challenge for me pretty quickly. This puzzle (above) seemed arbitrary until I noticed the broken branch on the tree in the background. Even so, it wasn’t until I walked much closer to the tree that I noticed the fruit – it just blends in completely for me. This is a puzzle that Blow expects I shouldn’t be able to do, but I just about manage. It gets much harder when the fruit disappears  later in the puzzle sequence – I spend a very, very long time looking for that fruit that probably isn’t there and have to stop the puzzle at that point. It’s doubly annoying because these puzzles are simple enough that Blow’s makes you fall back to the previous stage if you fail them – a way of slowing down attempts to brute-force them, I guess, but frustrating if you don’t know whether you can solve them at all.

So the puzzles, for me at least, haven’t moved on significantly from those I played five years ago. But the world – the world has. What was elegant and beautiful five years ago, looks crude in comparison to the rich, perfect world presented here. Last night I took a break from this to play the new Tomb Raider, a game that aspires to be photo-realistic. I controlled Lara as she pushed through deep snow, and it was thoroughly immersion-breaking – tree branches passed through her and the snow, her tools dangled loosely at her side, as if they had no weight or clipping whatsoever.

The Witness, by contrast, doesn’t seek that realism, but trumps it. It’s coherent and consistent, never breaking the world’s rules. It also has moments of stark, exuberant beauty – and, yet again, feels like it’s a love story. There are figures posed throughout the world in odd places – a small dog here, a man reaching for a chalice there, a set of twigs viewed from one angle forms a person imprecating the heavens, another set are eyes watching you. Notably, that image above looks innocuous – until you look at it sideways and see the woman. Given the stalking / romance theme in Braid, it makes me wonder about Blow’s heart and who broke it. But that’s exactly the sort of interpretation I shouldn’t be doing. The Witness is an art piece – meant to provoke without giving answers.

Was it worth waiting an extra five years to play The Witness? No. What I played in 2011 was satisfying and intriguing enough. Was it worth waiting to see the elegant, layered, unreal world that Blow wanted to create, which the puzzles are just a justification for? Yes, no other game has been quite like this,a Magic Eye world. Would I rather have had five more years of small game-making from one of my favourite creators than these limited iterative puzzles? Yes, yes, and thrice yes. I’m saddened at those lost years, and what we won’t get because of them. Would I have sacrificed this glorious, unique piece of art for that chance? I… don’t know.