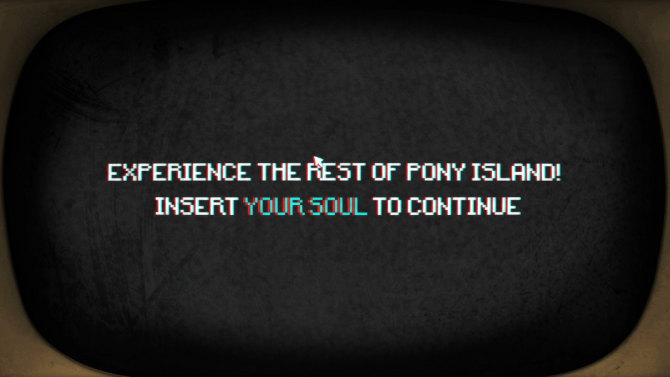 The devil, we’re told, was early into the music scene. His monopoly on all the best tunes meant that it wasn’t uncommon for wannabe musicians to start haranguing any vaguely sinister person they met at a crossroads, in the vague hope of swapping the contents of their soul (eternity, redemption) for next year’s Christmas Number 1 (fame, respect). Daniel Mullin’s game Pony Island (http://www.pony-island.com/) has the exuberant premise that Satan was an equally enthusiastic adopter of videogame technology and that you’re playing his game.

(N.B. It’s worth noting that, despite the name cross-over, this game is no relation of the more established Pony Island (http://ponyisland.net/). I could be wrong, but this older game looks like a terrible rip-off of My Little Brony, involving as it does breeding magic winged fairy sparkle ponies with each other and dressing them up, then selling them on an open market like Twelve Years A Pony. (I’m not going to check if that’s true, because I’m a terrible journalist.))

(N.B.B. Whilst Brony Island on that reading is impressively Satanic, it’s still second to the beautifully-disturbing Horse Master, where drugs, poverty, abuse and murder are all part of raising monstrous horse analogues for some grisly pageant. It’s the text adventure par excellence for those who… can’t afford their own pony to abuse? )

(N.B.B.B. At this point, I realise I should have done a top ten feature on The Most Satanic Games involving Horses.) 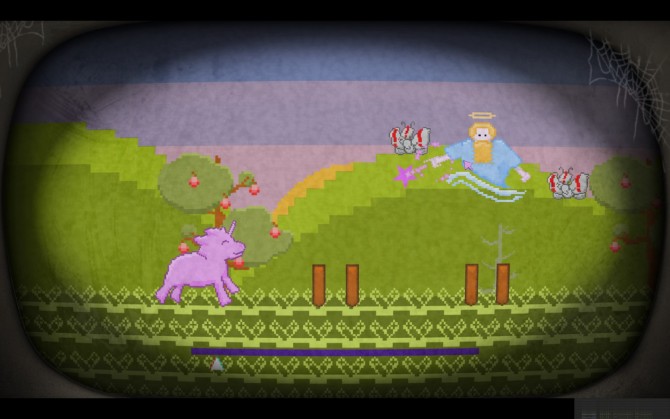 Anyway, back to Mullin’s Pony Island. It’s worth remembering that, though he was amongst the Judeo-Christian god’s chosen servants, nobody has ever claimed that the Father of Lies shares his ex-employer’s godlike capabilities, specifically omnipotence and omniscience. Milton depicted him as having troubles even getting out of hell, after all, and having to repeatedly ask unsuspecting angels for directions to Eden.

Pony Island’s depiction of Satan owes as much to Milton as it does to South Park, with the Lord of Sin producing an unambiguously-crappy endless runner game as his half-arsed means of eliciting souls. He’s the classic tech-ignorant businessman, intrigued by what the kids are doing, lured by the chance to capitalise on it, without taking the time to properly understand it, and berating you for not doing what he planned. 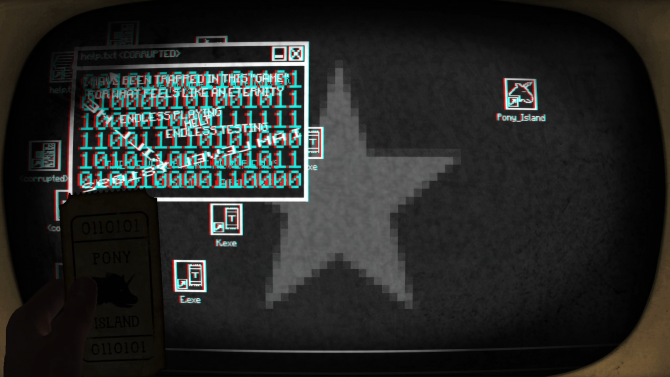 Essentially, in Pony Island, you’re playing an old arcade game designed by the devil. The game – Pony Island itself – is a saccharine one button endless runner, where the titular Pony must leap over fences to get to the end of a course. However, a ghost in the machine – what appears to be a trapped soul – increasingly gives you access to the computer’s innards, a rough Windows 3.11, DOS or old Macintosh style interface, where you can chat with the devil and the ghost, play his unfinished prototypes of other games, hack around with his code, and generally mess up his plans. Avoiding any more spoilers (they’re later!), your aim is to find a way out of the game and presumably return to your pre-arcade life, whatever that was. The look of Pony Island is key. Every last section of the game is served up to you behind a filthy, knackered CRT straight out of a pawn shop. The game itself is crudely Mario era, with a kiddy pixel look, and the back end is BASIC or DOS coding, with 8-bit colouring to highlight key phrases.

Past that look and familiar-sounding story though, Pony Island is smart. It resembles Frog Fractions in its disguised linearity, twisted humour and reckless onetime use of assets. Nothing you do really makes sense, but all of it builds your knowledge of how Satan makes games and how to escape him. Even as he’s frantically programming new levels for his Super Pony Adventure, you’re learning how to hack his systems using looping chunks of programme code – and from that he’s learning what you like too, as he later incorporates all the hacking you’ve been doing instead of playing the game into the game. By the end you’re playing the game both of you wanted to play.

There’s one trick in Pony Island though, which is pretty damn smart. So amazing is it that I’m going to hide it beneath a spoiler warning and encourage you to play the game first. 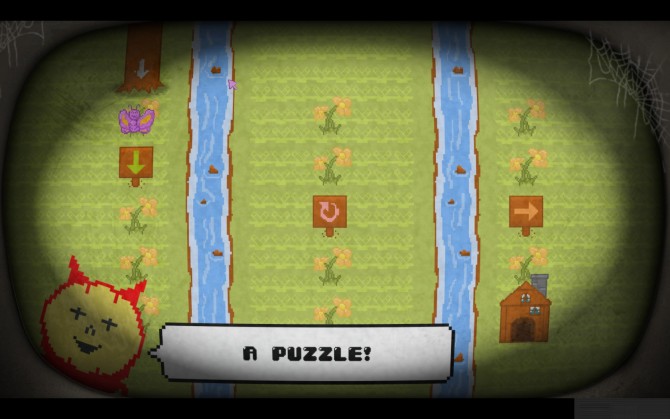 That old saw of Arthur C. Clarke’s gets appropriated everywhere: “Any sufficiently advanced technology is indistinguishable from magic.” But Pony Island creates a new saw; any sufficiently advanced programming is indistinguishable from magic. After all, we know that a good programmer can make us see anything on a computer screen – yet we also know that to do anything complex reliably is hugely difficult, and magic has to be both reliable and appear to be impossible.

But Pony Island manages this with the final big puzzle of the game.

You’re hacking your way to the final core system file to delete the game and escape. The final demon Asmodeus has challenged you to stay focused on him while he asks you questions – the simplest thing in the world, you think. He starts easy, asking you to say the dirtiest thing you can think of. You type it in. Then he starts to mix it up, by distracting your attention all over the screen, whilst sending you contradictory messages in two places at once.

You plough through this and he’s asking you more questions, when a friend of yours starts messaging you through steam – saying you’ve just messaged him something dirty. Which is odd because the game seemed to have a buggy relationship with the Steam overlay – it’s been sitting there, partially-bugged, since you launched it, so you assumed messages wouldn’t get through. But there’s your friend, bugging you – and it seems serious! They seem genuinely annoyed! 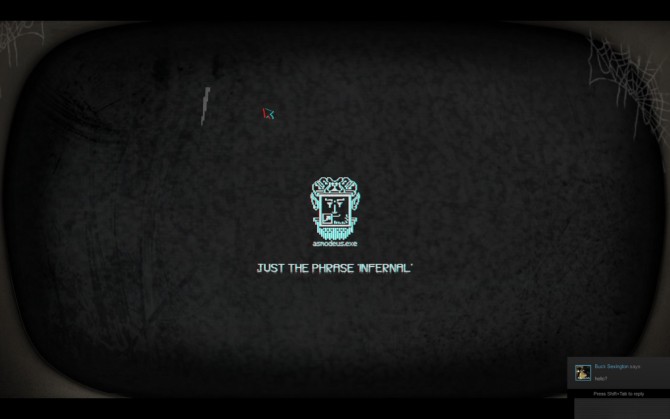 It’s so convincingly done, that it takes a half-a-beat before you realise that the messaging might be part of the game. But you can’t check, because to do so would be to look away from Asmodeus and lose the game – yet your friend keeps messaging, asking why you aren’t responding, as Asmodeus continues taunting. It’s a fantastically-smart trick that only works because Mullins has only released the game on Steam, because of the puzzle’s attention-focusing mechanics, and because of a Steam user’s familiarity with the chat message sound and system.

Now, there’s much more to the game than that. It explores all aspects of its theme, and bears replaying – even if the Other soul encourages you to delete it once you’re done playing. Even after completion, players have explored the game’s cryptic secrets, menus and ticket systems, finding hidden endings, messages about the medieval origin of your character, who the Other soul really is, and much more – the game even detects hacks to your own computer’s registry files about the game, and will respond to them. You can read more on this Steam thread, as well as Mullins’ hints at the sequel, Panda Circus.

Pony Island is available on Steam, Humble and GOG.