Ryan Clark on making Crypt of the Necrodancer 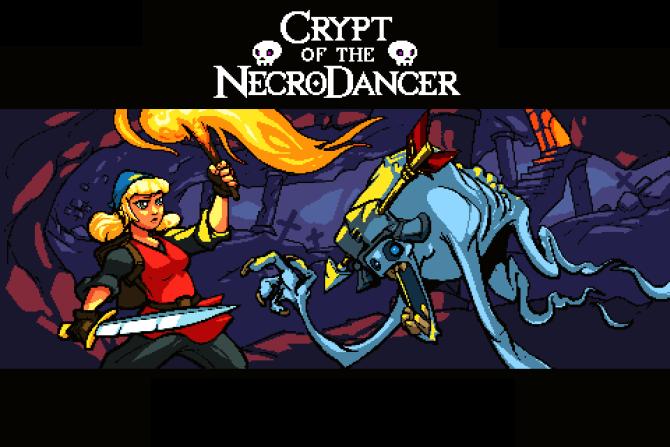 They’re the same across the world. On a high street, but not in the best part, a clattering arcade taunts the norms to pass it by. Inside, amidst the deafening pachinko machines, one-armed bandits and coin cascades, a pair of lank-haired teenagers are bouncing in perfect synchronisation to the poppy beat mandated by a hyperreal dance god. Their spindly legs thud against the plastic and steel pad. Now think of the roguelike. Pixel art fantasies made for and by lank-haired orc-murder fans sat in dark rooms, to enjoy alone, sat motionless save for their fingers, which are waltzing across the plastic and steel keyboard. Ryan Clark’s Crypt of the Necrodancer is paradoxically both of these, for both of these audiences, and it somehow succeeds.

To frustrate, to teach, to improve. What both genres share is iterative learning. Rather than merely bodging together two genres, Necrodancer takes that shared territory and builds on it. It’s eerie, for example, how enemy attack patterns mix so perfectly into a rhythm-action game. You control a character who attacks and moves in time to superbly-overblown music by Danny Baranowsky. Miss a beat and the enemies get a chance to attack. That’s the core mechanic, and it’s perfect. I mean, listen to this:

Clark first conceived of the game back in January 2013. “My goal was to create something with a Spelunky-like feeling of “fairness” (where each death is your own fault, never due to some unpreventable mishap), but closer to the feeling of the roguelike that started it all, “Rogue”. The realtime nature of Spelunky is what allows skill to be the deciding factor, but I didn’t want to entirely lose the turn-based feel of Rogue, so I hybridized. In my prototype there would still be turns, but they’d be of enforced duration. When I tried playing this prototype, those short turns felt like moving to a beat! So I tried playing the game to the beat of Michael Jackson’s “Thriller” and it felt amazing. Shortly after that I came up with the “NecroDancer” pun, and I knew that this game needed to get made.”

Having a great idea isn’t enough though. Thankfully, Clark was the co-founder of Grubby Games, a casual game developer that Big Fish games bought in 2009. After working at Big Fish for three years, he had some money saved up. Combining that with a loan from a friend, he managed to completely fund the game’s development, working in his basement in Vancouver. (The other team members of Brace Yourself are scattered over the North American continent). 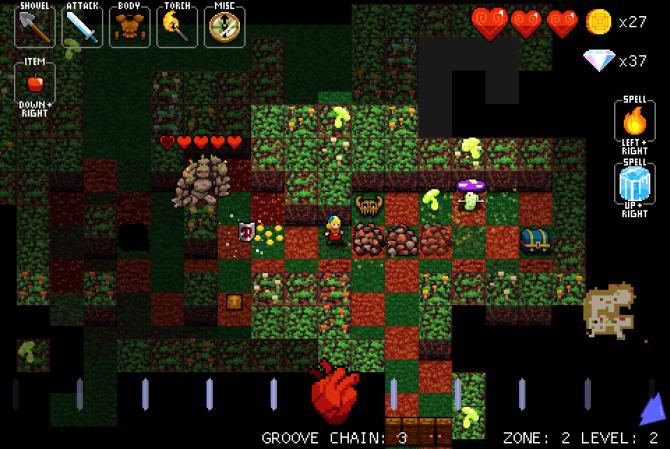 Next was deciding on the look. Roguelikes are often pixel art, due to the ASCII heritage of the genre, which was lucky given that Clark just prefers pixel art anyway. “Many people say that pixel art is a lazy way out, but I disagree.  To me it feels like a higher art form.  Because you’re constrained by the limited number of pixels, being able to concisely depict enemies and animate them feels like more of an achievement.  I compare it to poetry: I do not enjoy free verse poetry, but I do enjoy poems that are constrained by rhyme scheme and meter.”

“The skeleton hip thrust dance that Ted Martens created for the game would not feel nearly as amazing (to me) if it were high res art. It’s the fact that he pulled off the feel of that movement with so few pixels that makes it amazing. But perhaps it’s just because I’m old and feeling nostalgic?” Every single one of Necrodancer’s enemies has 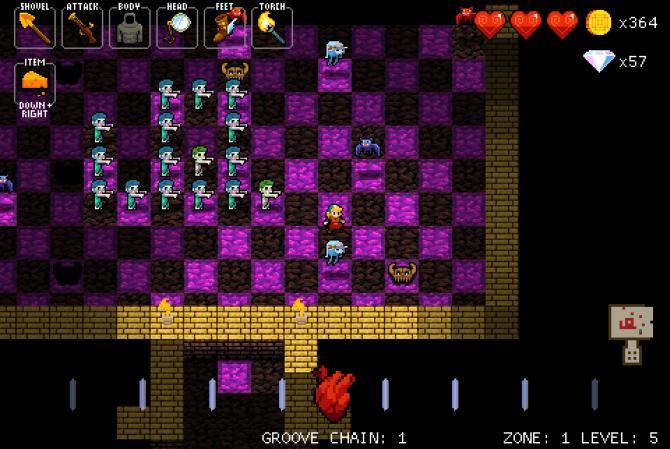 One notable trick Clark pulled was to make the game’s development as open as possible. First he made the game available to streamers the team were friends with from an early date. Then they released it privately to anyone who had pre-ordered. Finally, they put it up on Steam: Early Access. This not only raised the profile of the game slowly, but also gave them increasing amounts of feedback, particularly from the streamers. “Not only is it fun to watch people playing your game live while you chat with them, but it’s free playtesting too! …A great many of the items and ideas you see in the game now were suggested by players!”

Another stunning trick was to make Necrodancer a party game too, by integrating a dance mat, something suggested by fellow indie dev Alec Holowka. “I had been keeping the controls simple (just the 4 arrow keys) because the game was already extremely mentally taxing to play. If the game had the usual roguelike “Press Q to Quaff Potion” hotkeys, peoples’ brains would explode. So I designed the inventory system to be extremely simple. Upon seeing an early version of the game, Alec suggest that we try playing it on a dance pad. The next time Alec had a party at the “indiehouse” where he lives, I brought a dance pad and it was a success! It was great fun watching people fail at the game while flailing about on the dance pad.

Ryan knew that he liked the game, merely from playing and grooving to songs like Thriller and Outkast’s ‘Hey Ya’, and his friends did too. But the big test was at Pax Prime 2013, in the Indie Megabooth, when he set a demo up with an old school metal dance pad. “We had no idea if people were going to be willing to publicly embarrass themselves on the thing! We worried that our booth might be shunned!  But luckily for us, from the moment the show floor opened, our we were mobbed. We had a huge crowd for all 4 days of the show, and received a ton of positive press.  That was the first time that we started to think that we might have a hit on our hands.  We then took the game to 8 other shows in 9 months, from Tokyo to New York, and had similarly positive experiences all around the world.” 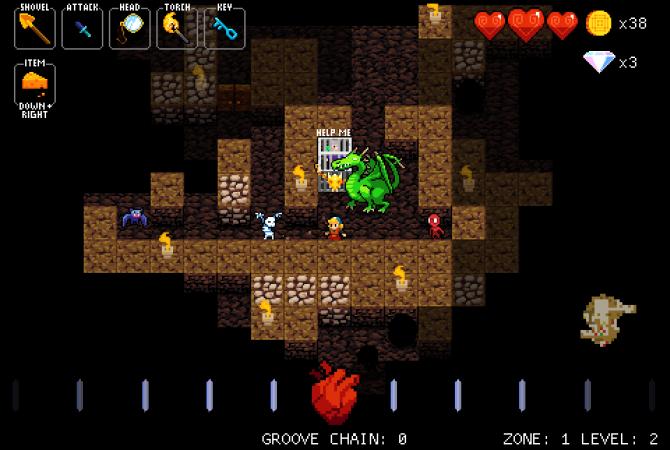 Like we said earlier, Clark put the game up on Steam Early Access early in development. He’s not sure if that was a good move or not, but will wait and see how the game does when it’s finally released. We managed to hit #1 with our Early Access launch, but it remains to be seen if we can do that again for our full release.  If we fail to do so, I expect it would’ve been better for us to focus on a single big launch.  Many people who found out about the game during our Early Access launch said, ‘I don’t buy Early Access games!’  So we may have ‘spent’ our buzz only to reach people who weren’t interested in purchasing.” 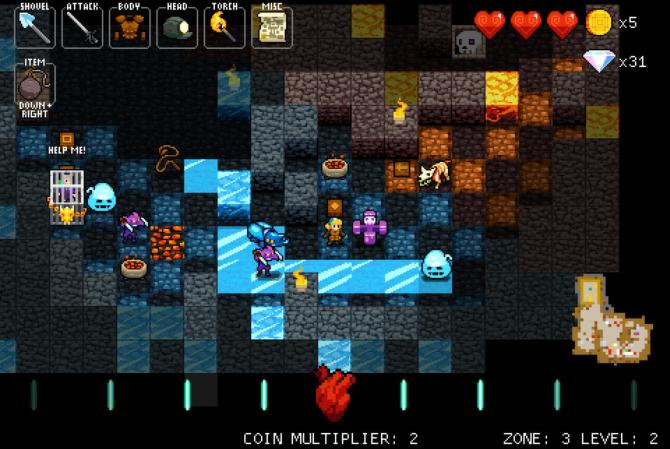 We can’t help but wonder what hybrid genre Clark will come up with next. A medical racing sim? A political bloodsports game? He doesn’t have an answer yet either. “I’m not sure!  I have a number of ideas I’d like to prototype, but I’m waiting until NecroDancer is 100% complete before allowing myself to go down that road.  I can’t let my mind wander just yet!” For the moment, he’s just focusing on that beat.