Kickstarter is dead, long live Kickstarter. When gaming Kickstarters started, it was a way for indie teams to get funding to complete their game prototypes. Then the mainstream community came and started paying hundreds of dollars for nostalgia projects from famous old developers. Now the mainstream’s evaporated with disappointment and the site has reverted to funding small projects. Projects like Halfbus’ intriguing narcotics management game ‘Basement’, which grew out of a Ludum Dare project and doubled its modest $15,000 target just the other day.

In Basement, you play an oddly-familiar scientist who’s determined to sell drugs. Illegal drugs. Your job is to manage the production and distribution of said mind-bending substances. You choose a location as a front, excavate beneath, build manufacturing capabilities, and sell your different brands of bottled happiness – all the time, trying to stay one step ahead of the feds. 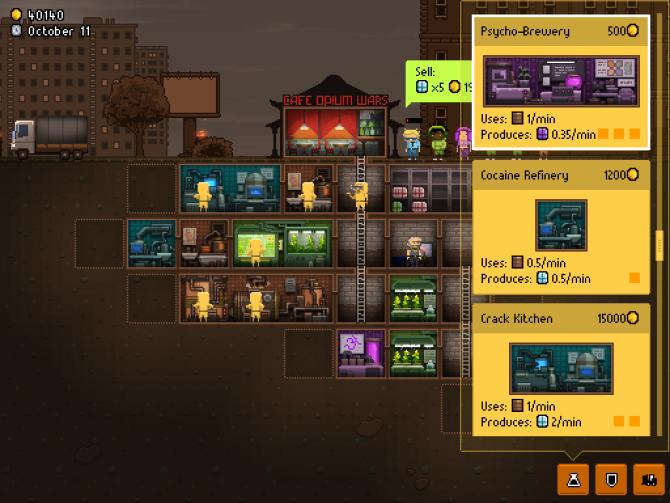 Halfbus is a Eastern European developer that has been around for two years, based out of Minsk in Belarus. The three-man team met whilst they were working at Gamelab, the Belarusian branch of Russian Nival, the developers of King’s Bounty and Allods Online. “Our artist had a huge experience before working at Nival” says Alexander Degtyarev, the lead programmer. “Dmitry, one of the programmers, was working on micro-controllers programming, and for me it was first job in gamedev. We worked there 2 years, and made a few games using Unity. Next 2 years we were all making different stuff, periodically getting together for upcoming Ludum Dares.”

Going indie in Minsk wasn’t easy sailing. Though Halfbus started as just two of them – a coder and an artist – and their only costs were food, their rent and the basic version of Unity, their entire indie development budget was a small pot of savings from working at Nival and a few freelance jobs. Though they managed to make a mobile game, they had to put two larger projects on hold.

It was Ludum Dare 29 that threw up the idea for Basement. “This came from the Ludum theme ‘beneath the surface.'” says Degtyarev. “We interpreted it as something illegal and shady.” Their concept was for a real-time strategy game about a ‘below-the-surface’ enterprise. Here, you process raw materials into four types of product, to be distributed amongst four types of purchasers. A secondary facility is designed to attract inspectors and FBI agents. It’s simple but, like its subject matter, highly addictive. 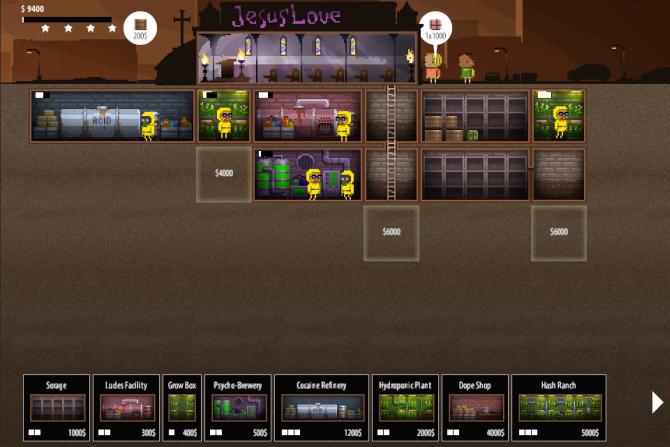 That version was a simple single-screen affair, where the player builds their facilities, sells drugs to punters at the front door, and uses the money to dig deeper and build more manufactories. The inspiration, Firaxis may be flattered to hear, was the base view in the modern XCOM. The way rooms and ladders are created, and the general visual aesthetic were derived from that. Other visual elements were added in as they were needed for their mechanics.

As Kovtun told Xsolla, “There was a whole city at the surface with shops, cafés, churches. Everything is fine and dandy there. Underground everything is much different. It’s dangerous out there. There are criminals and dangerous situations… Basement is special because of many things. Apart from great visuals and cool gameplay the game constantly creates random events, which make the whole game incredibly fresh.”

Notably, this wasn’t inspired at all by Breaking Bad. Not even the scientist with the goatee and hazmat suit. (I suppose he could be Gordon Freeman, this could be Half-Life 3 and I could be the next Pope). “It could sound funny, but we still haven’t watched Breaking Bad.” says Degtyarev. “Everyone is talking about it that basemen is like Breaking Bad game. But I barely know what is happening in the series. We’ve decided not to watch it until release, to stay on our own vision.” 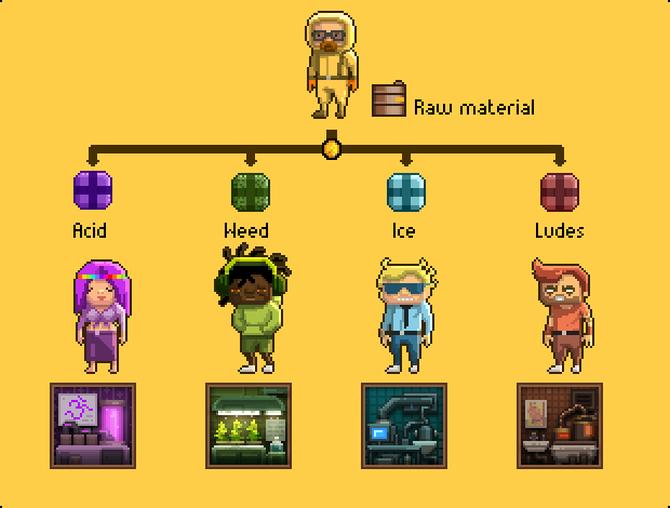 You can still play the prototype on the Ludum Dare page. “That version got lots of positive feedback and we started developing that game as a big polished project.” The game was so popular that it was downloaded 50,000 times and the team’s Dropbox was banned, for breaking the traffic limits.

The Kickstarted version is promising to be much more interesting, featuring a large overworld map, with quests and different locations available to buy, vaguely reminiscent of the bizarre pizza-mafia sim Pizza Tycoon. “Basement is about micromanagement, where you layout basement, hire workers, trucks, and sell small packs of upcoming junkies…” say  City is designed to be a host for events, long-term strategy decision, large amount selling and hardcore encounters.”

That’s not all there is to the game though. Random events add complexity to the game, affecting both the basement and the larger city, and. And a research tree lets you choose how the game develops yourself – though the Halfbus developers are keen to emphasise that it’s all still at a very early stage. 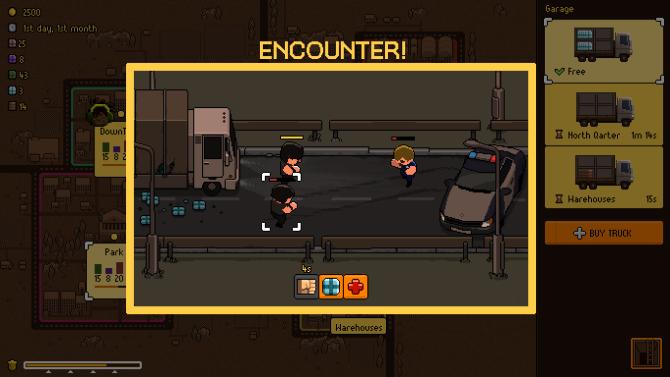 And there will also be tactical street battles, in line with the team’s love of XCOM, Evil Genius and FTL. “Currently we’re testing JRPG-style battles with some improvements, but it’s still not clear enough to talk in details.” Get too rough and your notoriety will rise, making the cops and other gangs take more notice of you. Change your style – just selling small quantities of the cleanest drugs like cocaine to the elite of the business district will keep the cops away. Selling huge quantities of dirty drugs in the suburbs will bring the cops down on you, fast. Then the cops might invade your basement, fighting with your security and chemists, until they get to your controllable character. And when they catch you, there’s no loading – off to jail you go, for that 153 year sentence… 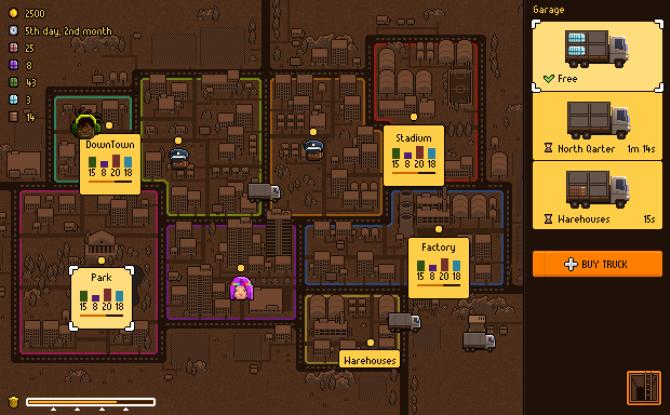 The developers are keen to clarify that they’re not in favour of drug culture. “We’re not glorifying it. Players during the game will see how badly you affect the city and won’t avoid punishment.” Their knowledge isn’t first-hand either; they’ve read articles on Wikipedia and heard about them in the local news. The authorities in Belarus, it seems, are struggling with the same problems governments the world over are, as smart hedonistic scientists develop new variants of popular chemicals which aren’t illegal yet. Halfbus is implementing this research aspect in Basement, with new products letting you sell legally for a short period of time.

The game is planned to appear for sale as a fixed price product. We’re estimating that’ll happen sometime in early 2015. Though if they want to get us hooked, they should give away the first one free.