A View: Duskers – exploring a dead universe through a command line interface. 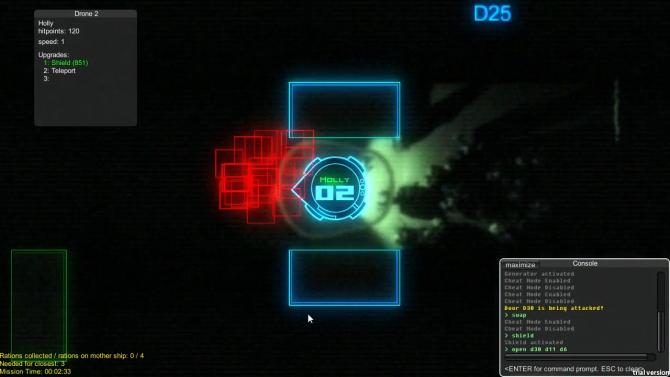 Tim Keenan had a good life. Each time he set himself a goal, he achieved it. First, to work in AAA video games (at Rainbow Studios on ATV: Offroad Fury and Splashdown), then to work in movies at Dreamworks, as an FX artist “simulating natural phenomena towards an artistic result, this nice merger of science and art” he says. But it wasn’t enough. “Life was good, I loved the people, but I felt creatively stifled.” He wanted to make indie video games. So when Microsoft released its accessible XNA programming system he and his pregnant wife Holly quit their high-flying jobs, to make their dream a reality. “It’s kind of not a choice at a certain point, when you’re passionate about something.”

Their first game was A Virus Named Tom. Tim and Holly poured their hearts into it – and all their savings. The unusual theme – a fired mad scientist sending all the useless gadgets in the world crazy with a smart virus – and captivating puzzle mechanic – like Gunpoint, the genre is best described as ‘action-programming’ – won it critical plaudits.

Yet, despite gaining attention and distribution, the game barely made enough to cover its costs, let alone pay back those savings. It went on sale, it went into Humble Bundles (which paradoxically reduced its score on Steam as a range of new users were stymied by its clever, tough mechanisms), but it only just kept the company going. Indeed, Holly had to go back to work to enable Tim to keep programming. 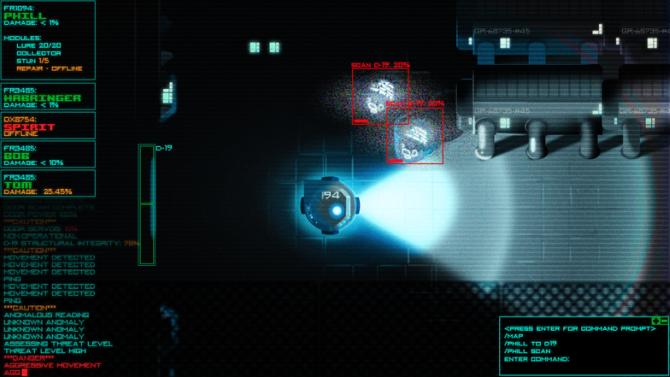 Duskers is Keenan’s second project. “It’s a survival-horror real-time strategy roguelike.” You play the only (as far as you know) survivor in a universe that’s become a graveyard. For fear of contamination and for safety, you’re using remote drones to explore the derelict spaceships near to you. You’re searching for an explanation – and for the rations you need to survive. Each ship you explore may have comestibles to keep you going and ship logs that will unlock more of the story, but also is host to all sorts of unknown creatures and problems.

“The crux of the game is deduction.” says Keenan. “When you board that ship, you don’t have space marines and bazookas, it’s more like Alien. You can open and close doors, utilise motion sensors and so on.” It’s a plodding game, but when things go wrong (and they will, be it radiation leaks or vacuum breaches or alien attack) you need to react fast.

Your remote drones have no automatics though – so you need to manually control them, even down to typing into a command line interface to command them to use their abilities. You can send a handful into each ship, customised differently with tech you’ve scavenged from other broken drones. Between ships, you can upgrade your drones’ upgrades and repair them, if they’re showing errors. If they break, they’re gone. But repairs are crazily-expensive – more than the player will get from scrapping two or three other upgrades – as Keenan is trying to force players to mix up their playstyles. 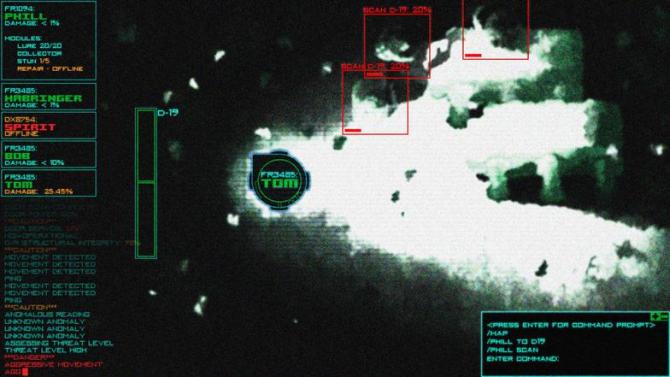 Each new ship is a puzzle, both in terms of programming and survival. Let’s say you have a drone with the teleport ability, one with a shield, another with a motion sensor, and another with probes, when aliens start tearing the door down to the hangar you arrived in. Do you send the shield drone out through the aliens to distract them and sacrifice it? Do you send the motion sensor or probes out to find a way around them? Or do you send the teleport unit through them, taking damage, to a lockable room, lure them in, lock it, then teleport away? Each choice has a risk, especially if the upgrade breaks in use.

It took scavenging to get the game underway too. Savings spent on Tom, to get it made, Keenan went to the Indie Fund, that bunch of philanthropic WASPs. “We made three prototypes for Duskers. But I’d got no good deals when I’d pitched A Virus Named Tom to publishers. I just thought, ‘when I walk into that room, I want jaws to drop. This game has a command line interface. It’s like a really slow, plodding RTS. You manually control each unit.’ Ironically that was the one that started to get love from both indies and publishers. It’s like trying to date hot girls, then giving up, and going home to play video games, and getting all these calls… The moral of the story is be yourself.” Though the Indie Fund group agreed to part finance the project, it was only a small fraction of what Keenan needed to get it done – because they thought it was too risky and too expensive.

So Keenan asked the Humble Bundle founders, Jeff Rosen and John Graham if they’d pitch in, and they did. But that wasn’t enough “and that was the end of my rolodex!” says Keenan. Thankfully, Indie Fund’s Ron Carmel also believed enough to pony up and even asked his friends too. It seems like everyone Ron showed the pitch video to – Team Meat’s Tommy Refenes, our own Cliff Harris, and even bigger names – wanted to help out. “24 hours later (Ron) said ‘we’ve got the money’ and I was like ‘what? It was like writing a book and having Stephen King and Orson Scott Card and J.K. Rowling ring you up and tell you that they want to fund it. That night Holly and I were drinking red wine and laughing like idiots.”

“It’s not a sizzle reel, you know?” says Keenan. “It’s talking about my aspirations and hopes and dreams and all that crap. And that resonated.” Tied into that is another part of the appeal to all these successful indie publishers; that Duskers is a game makers’ game, like Jose Luis Borges is the writer’s writer. As it’s at a pre-Alpha stage, the appearance (slightly Roborally) didn’t sell the game but the mechanics and plot did. Specifically, the very programmer-like way that you interact with the world, literally typing text into a box whilst aliens burn through the doors or phage clouds chase down your drone.

“My favourite thing about the Command Line was that I would put it in front of people – mainly game developers, a very biased audience – but the response I got, almost every time, was ‘I love the Command Line interface… you should take it out of the game. I love it but those ones out there won’t” I’d say that was really interesting, because there are probably more of you than you think. And I don’t need to sell the game to 4 million people. If you’re going to fight for the general audience, you’ll lose that fight, because AAA can throw more resources.” 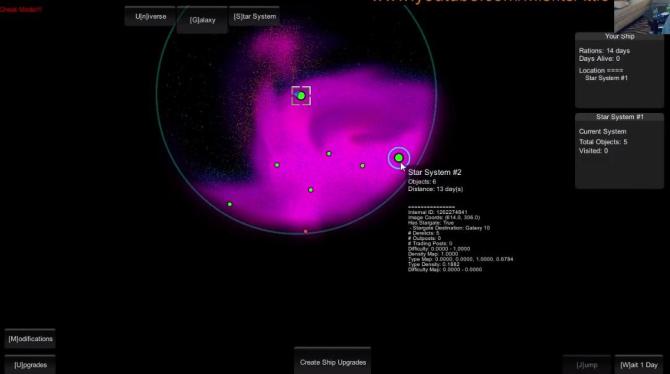 Of course, Duskers is still at an early stage, but it’s advancing fast. Keenan revealed while we were chatting that whilst the core mechanic has stayed the same as that initial pitch, he’s expanded it to include a metagame that passes over several play-sessions. Like Spelunky’s tunnels, players can discover wormholes in particular star clusters that link up galaxies, into a larger universe map. Any wormholes you explore form new maps, which can be linked up if you survive long enough, across one or multiple lives. That will allow you to fast-travel between areas of the universe. You’ll find logs that reference secrets in places you’ve already been, or places you don’t have the equipment to explore yet, in this or next life.

And that, like the game’s other mechanics, isn’t explained and isn’t obvious. Keenan thinks that players are getting back into titles that are not ‘hand-holdy’, with hyper-simplified macros. The game is relatively simple to control, beyond the appearance – after all to turn your drone’s shields on, you just need to type ‘shield’ or even just ‘sh’ as the Command Line will autocomplete for you, like any good programming interface – but that’s for the player to discover. “I want to empower the user to be able to say ‘hey, I need more information and be able to seek that out, but don’t tell me everything because I want to explore this world.’

Part of the secret behind Keenan’s success, beyond coming up with an idea and working prototype smack-bang in the middle of the core indie dev mentality, has to be his energy. Talking to him is like biting a live wire – he’s moved on each time he’s achieved his goals. This time, though, indie games is where he’s planning to stop. “If the universe keeps giving me what I want, I’ll keep wanting more. But this – making indie games – is the one time I can honestly say that I could do this for the rest of my life.” And that’s good news for gamers.