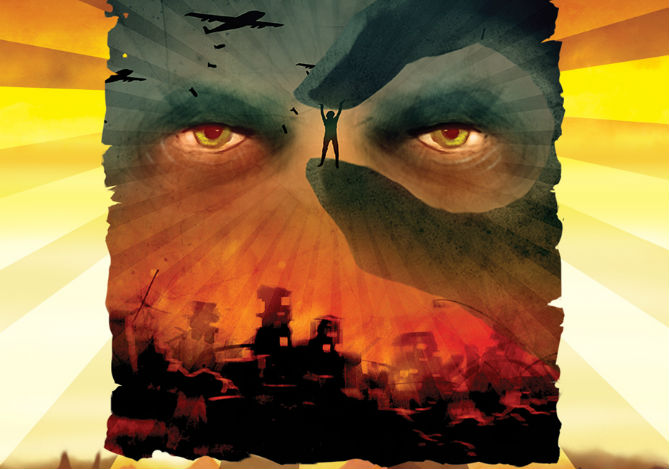 There are fewer game concepts more bizarre than that of Mushroom 11. In development since the 2012 Global Game Jam, you control an amorphous organism across an apocalyptic landscape, battling swarms of mutant creatures. It’s a puzzle-platformer at heart so the uniqueness comes in its control mechanic – the organism will regrow any damage except at the point of damage, so the player is endlessly erasing bits of it to change its shape, centre of gravity and location.

It’s being made by husband-and-wife team of Itay and Julia Jeren-Detar. I caught up with Julia to find out where the game is at.

I’ve been playing Mushroom 11 at events for years now, probably since GDC 2013. The basic mechanic seemed complete back then; what have you added?
We haven’t changed much in the mechanic since then. We did try a bunch of different variations tied to power-ups and scoring. One such variation was to make the mushroom grow when you ate bugs or picked up different creatures. However, we found that changing the mushroom’s size made the game less fun. If the body is too small it limits the types of puzzles you can make and makes it much harder to solve them. Too big makes it both easy and tedious because you have more on your screen to manage. So finding the right balance with that mechanics took some time, and of course most of the work since has been in content creation and how we teach players to move (our tutorial system).

You’ve gone for a story based on Paul Stamet’s TED talk, about how mushrooms can save the world. Can you tell us more about the story? Did you have the mushroom theme before that talk? How did the talk inspire you?
While the game is not based on his talk, we definitely got inspired by it. The story was based around the mechanics of the game, which in the first place involved death and rebirth. The talk definitely helped us by demonstrating how this theme could fit our narrative.

Again, Mushroom 11 came out of the 2012 game jam, based on the ‘Ourobouros’ theme. How did you go from that to the mechanic?
This symbol with the snake eating itself, represents the cycle of life and death and in essence links the two. What really caught our attention as designers was the using death as a means of control. Applying that control scheme to a platformer seemed like an interesting experiment, and a few prototypes showed some potential. It took years, literally, to get that mechanics to feel satisfying and enjoyable. 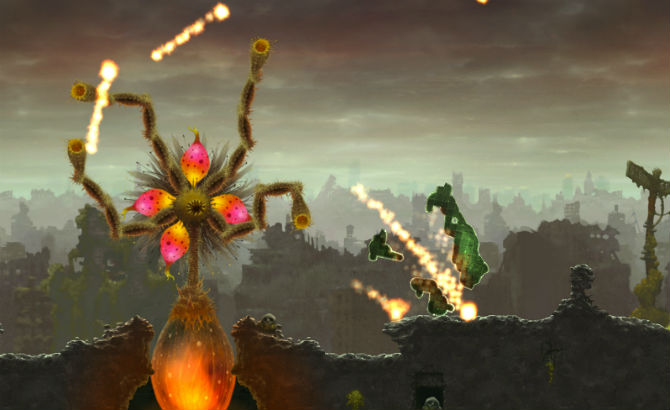 How did you conceive the mechanic? Pushing a gravity-free fluid look is familiar from something like microscopy (though not in games), but the jump to it maintaining its surface area is a huge and compelling twist. Were you surprised how conducive it was to action gaming?
I was surprised indeed. In fact, it was one of a few attempts based on destruction and regrowth that we tried during GGJ. But keeping a certain volume or surface immediately felt like the right solution, maybe because there was some sense of ownership and even identity – you are the mushroom. You no longer just control an arbitrary set of cells, it’s a creature, with a clear identity. That makes you think of its origin and history, and maybe even care about it a bit! 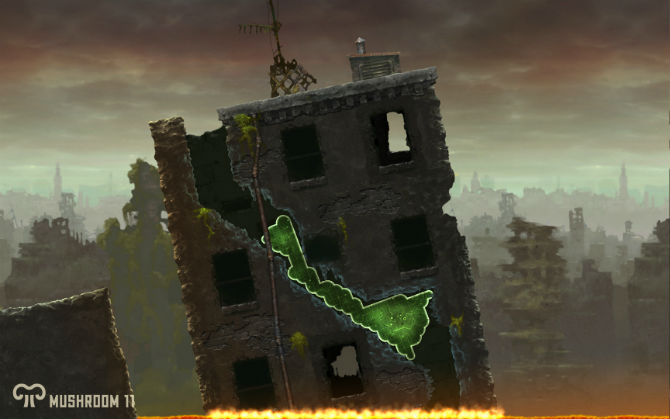 How did the Indie Fund help?
Indie Fund is a team of talented and successful fellow developers, who help other developers with funding. But that affiliation and being part of that family of developers with good advices and general support, is the most valuable part.

The art of the game has changed substantially over the years. What does the new look represent? How does it segue with the music?
We had a good idea of the kind of art we were looking for – gloomy yet whimsical depiction of some sort of post-apocalypse, with weird mutations and no humans. It took many iterations to get the right visuals and balance, and we’re still adding and changing. 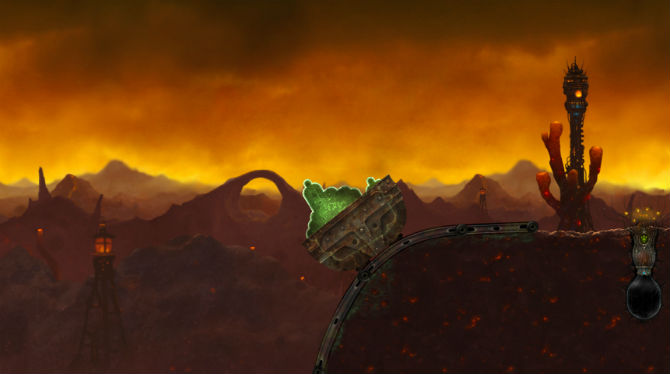 You go to lots of indie events. What other games have you seen that you’re looking forward to?
Framed made by Loveshack Entertainment which is a puzzle game coming out soon for iPad/iPhone and tablets. It’s a really clever comic book puzzle game where you move around the cells to change time and the story.

At Gamercamp we saw a lot of great games. Two that stuck out were Particle Mace by Andy Wallace is a game that was right next to ours at GamerCamp in Toronto and we couldn’t stop playing it. It’s a very simple asteroid type game where your weapons are attached to you and you need to swing them around to destroy things. Mouffe is more of a festival game where a quilt is the controller. It uses connected threads to sensor touch input. Players lay on the quilt and certain squares that are pressed will project images onto to top of the tent it is in. Julia is a quilter so she was very excited about this game.

At EGX, A Light in a Chorus was just beautiful. Induction, another puzzle game, was quite fun and very clever. We can’t wait to see more puzzles as we played through the whole demo.

You can find out more about Mushroom 11 here