Tabletop Tutorials; what Video Games should have learned from Board Games

One is a medium that seems age-old to its youthful players, set in its ways, rarely fresh and dominated by people who think that the old games are the best. The other one is board games.

The trend is mature now, but board games over the last few years have been a much more interesting space to watch than video games. The spread of geek culture has made high-quality, complex board games desirable, compared to the cheap, badly-designed rule-systems we grew up with (Monopoly, Snakes and Ladders, Ludo and the rest). Globalisation and technology advances have made small, high-quality board game print runs viable. Kickstarter meant that once designed, board game developers don’t have to fund the costs of creation and shipping – and they might even make a profit before they’ve even shipped.

The best of these board games – from the ancient delights of Go or Senet to the more modern Arkham Horror or Catan – are a mess of rulesets and incentive-structures, just like video games. Some are fantastically simple, some impossibly over-complex. However, they’re packed full of learning for video games design, which we don’t take as much note of as we can. So what have we missed? 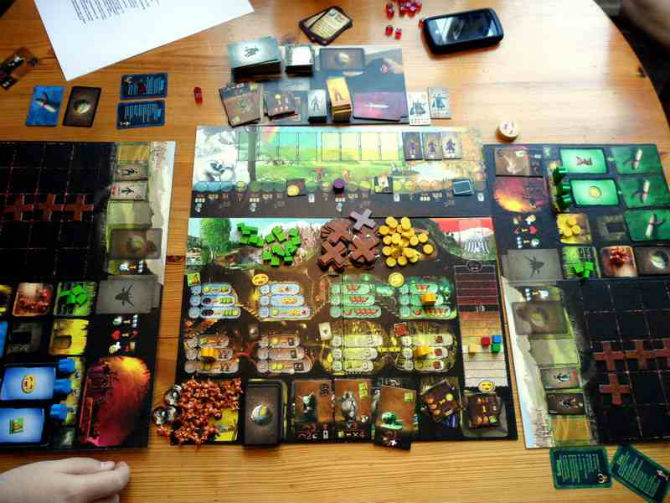 The primary things that video games have slowly learned from board games is that humans are much more interesting than anything anyone can program. Humans, even us geeks and nerds, are fundamentally social creatures, hungering to pick metaphorical lice off each other’s figurative scalps. Even a simple card game like snap manages to be enjoyable, despite having just one rule, because it’s social.

We’ve done it clumsily in video games though. Take Johann Sebastien Joust, which is just a version of an intuitive playground game like tag – but made awkward by the tech. Or the way Farmville and Candy Crush used your friends as tokens to encourage you to keep up with the joneses and spend your money, producing a kind of asychronous, unskilful multiplayer that isn’t actually multiplayer. Or we just spend a lot of time shooting each other in the face (thanks to Doom).

Also, that human interaction throws up much more interesting things, especially when competing for scarce resources. Dungeon Lords and Libertalia have fun with the order that players act. Agricola and Puerto Rico make players compete for scarce resources. Catan allows you to trade for them. The Resistance and Bang! give every player limited information and (sometimes) shared goals. All through these players are talking, emoting, gesticulating, and hiding. 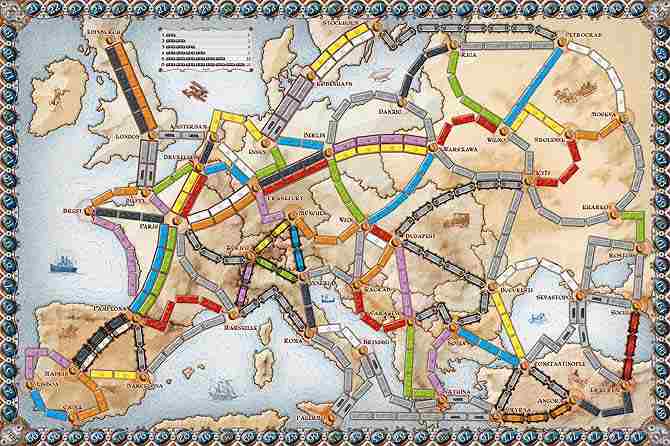 Now, of course video games use maths – they’re built out of it, bootstrapping virtual worlds into existence on the back of 1s and 0s. But the maths of their internal questions or systems are less interesting. Many of Reiner Kniza’s games, like the Lost Cities card game, are just mathematical equations disguised by an ancient theme. A Ticket to Ride is mainly a problem about mapping the cards in your hand to your targets as fast as possible. Catan is about turning the random resources you get into the specific groups to win. Space Alert is about realising that your entire spaceship crew is terrible at programming, and that someone forgot to hit the space bar on the ship’s computer to stop it going into screensav-

The key point is that these equations are not soluble. There isn’t an easy answer for what you should do, because of that human interaction, but also because Knizia and others design their games so nothing meshes quite perfectly – and in that scarcity and plenty, you have to make a call, because you have to do something.

Similarly, board games use constrained randomness and then supply players with tools to sidestep it, or turn it to their benefit. In Catan, you know the odds and play them; but they’re not the only path to success, as bartering and social manipulation are equally important. The order that cards fall out in Race for the Galaxy or Netrunner is hugely important – but you manipulate it by picking your own goal in the first one, or by building your own deck in the second.

With all these systems, you grok them, but you’ll never quite master them. And if the game ever lets you get to the point where you do. you buy a new game, rather than continue doing the same simple actions over and over until the story ends (see – all FPSes). 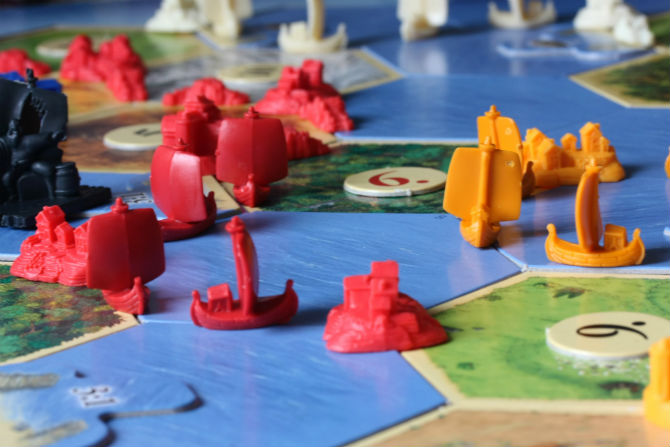 Crucially, board games encourage people to take small physical elements and make up stories in their head. The diaries that get written over at RPS have an element of this and Dwarf Fortress has a much bigger chunk, but it’s that representational simplicity and focus on human interaction that sets your mind imagining.

Think of the island you create in every game of The Settlers of Catan; the last settlers, arriving to find all the good land is taken, and in the new world they scratch out a living on the desert’s edge; the impoverished mountain dwellers who find themselves in the late game with their town sitting on all the ore in the world; and the towns that were the brick foundries of the new colony, that see demand die off as the game progresses and have to resort to exports to avoid being raided. Games like Arabian Nights or Monsterhearts are entirely about storytelling, setting up structures so your character changes and leaves a shimmering trail through time. Or think of the entire P&P roleplay tradition, now subsumed into board games, in the form of Advanced HeroQuest or Descent, which is about nothing but joint fantasising in a given ruleset. 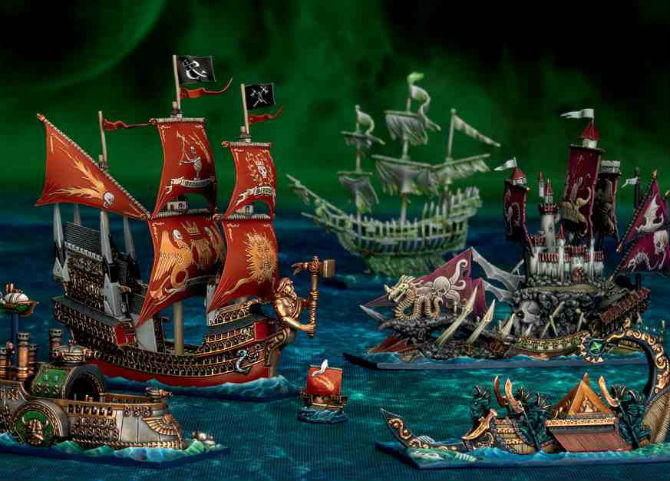 Not that like that. I mean that another thing that board games have taught is that tangibility is wonderful. Our hands are wonderfully sensitive things, containing more nerve endings than there are people in Wales. And boardgames, like Dreadfleet or Mousetrap or Marble Run, are just damn good fun to assemble, and fiddle with and stare at. Face it, without those beautiful little models, the actual Games Workshop battle systems were always a bit shonky and unbalanced.

Arcade games knew this, growing as they did out of the Nickelodeons and penny arcades, and throwing up bongos, dance mats, plastic guns and the rest. But it’s taken a lot longer for video games to get to grips with getting to grips. Guitar Hero managed well, as did Rock Band, before they died completely, but it’s really only with Skylanders and Disney Infinity that playing with little things has taken off. 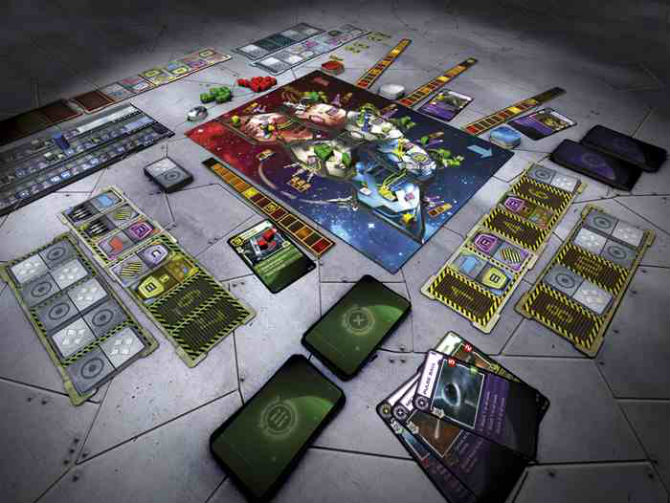 There are a ton of other lessons that video games can learn. Space Alert and Robo Rally show that programming can be fun. Mighty Empires and Descent: The Road to Legend show that games of huge scale are plausible – and these games should be easier to do online than they are in person. They have excellent asymmetry (Chaos in the Old World), they can be elegant (Hive), they can be modified over time (Risk: Legacy), they have multiple paths to success (Carcassonne), they have huge replayability (Cosmic Encounter), and they have hugely variable set-ups (Dominion).

But board games do have failings too. They’re often terrible time sinks. To set up the board for Mansions of Madness the first time can take several hours – and then the game might be over in 30 minutes. And let’s not talk about the Warhammer tabletop battle games, where you might have to build your own scenery first…

Many games do have win-formulas, but it just takes longer to get to them. For example, getting up to speed on the few ways of reliably winning Puerto Rico is frankly dull. And playing the horribly internecine Diplomacy with seven people may take a few days – to replicate something standard Civilization multiplayer does for you.

Board games haven’t until recently automated stuff. Barring the forthcoming X-Com game and the amazing Space Alert, few of these games make effective use of other tech to speed up the game and set-up process. Just picking out the pieces for the horribly over-complicated Civilization: Through The Ages is a challenge in itself.

As Quintin Smith said, many moons ago, board games are the dream of their creator, communicated correctly. Their tangibility, their simplicity, and their use of our humanity make it easier to communicate that dream. Learning from this will make video games much, much better.