The title of this week’s round-up isn’t my creation. No, it’s a genre that’s just starting to emerge, seemingly sparked by people wanting to say that FTL can’t be a roguelike. Is there much to distinguish the procedural death labyrinth from the roguelike? Well, both Lars Doucet and Tanya X from Gamasutra seem to think there is. You can read more about it at www.proceduraldeathlabyrinth.com

If you can’t be bothered; basically, there’s a ‘Berlin Interpretation’ of what constitutes a roguelike, derived from the 2008 Berlin international roguelike conference. The conference, like its subject matter, featured permadeath, incomprehensible tomes, and was packed with monsters. The Berlin Interpretation of the roguelike mentions phrases like ‘non-modal’, which were probably argued over for days.

I’m not going to look up what non-modal means is this context. I have to say, as you might be able to tell, I couldn’t care less about the academic consensus on roguelikes; in fact, I often think we should pay attention to how academics define things only so we can take the opposite view.

The biggest differences from roguelikes, as far as I can see, are that PDLs aren’t grid-based or necessarily turn-based. Does that make any difference? Is this a useful distinction? Well, the addition of real time combat and more fine-detailed movement and combat has certainly added the qualities of something more video gamey rather than board gamey to the PDL equation. Whereas in Dungeons of Dredmor or Rogue, a single move could constitute an agonized decision matrix in itself, in Risk of Rain or Nuclear Throne, players are as likely to be reacting frantically to the action parts of the game as working out a mid-term strategy on the basis of the random events.

Another notable difference is that recent PDLs often have something like a meta-game or persistence, where players can carry over advancement from earlier runs. The addiction element of these games doesn’t just come from the mechanics of surviving further in the main game, but from the compulsion loop of wanting to unlock more elements to improve your next run.

Anyway, here’s the best PDLs. There are a lot, because they’re mostly innovative and good – unlike most, the genre hasn’t tired out yet. And I’ve never got even halfway through any of them. You can let me know your thoughts on the Twitter handle at the bottom. 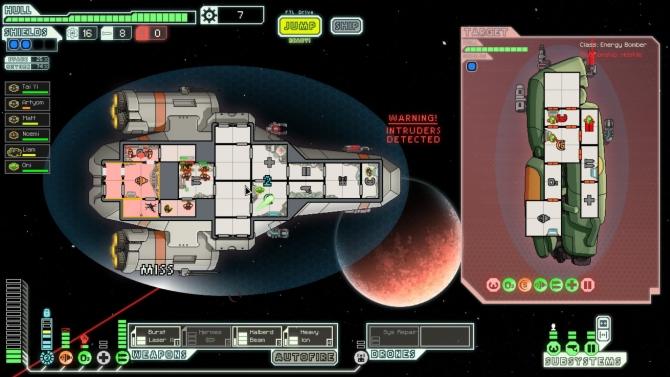 The ur-game of the genre, FTL was so roguelike and so un-roguelike that it prompted thought. Players take control of a spaceship with a small crew, trying to outrun an enemy fleet that’s conquering all known space. Your apparent job is to get a message to the friendly fleet waiting at the end of the game.

Your actual task is to explore this galaxy, to build up your ship enough to survive to the end of the galaxy and then (SPOILER) defeat the enemy flagship. That’s harder than it sounds because the game has so many random elements and fights that you can easily lose crew to. The combat system is pseudo-turn-based, with you choosing what weapons to fire off, managing power and crew locations, and opening and shutting airlocks.

Because of the random nature of the runs and the gradual learning players get from playing over and over, the game instils a sense of compulsion in you. You want to unlock that ship. I defeated the boss in my first few hours of playing; apparently, I’ve kept playing since then just to enjoy the stories and unlock those new ships and ship variants. 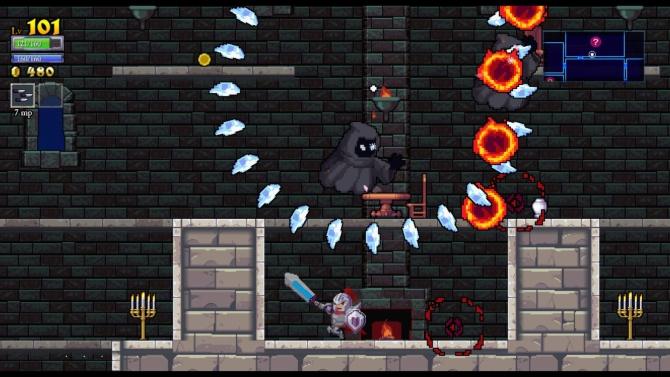 The next game to build heavily on the FTL model, Rogue Legacy is a metroidvania style game, where you control a fragile hero as he explores a randomly-generated platform castle. And inevitably dies, leaving the chance of exploring the castle to the next generation. The next generation is inbred, resulting in all sorts of strange disabilities for each new hero. Gigantism, colourblindess, and just plain insanity are rife in this family.

However, with each death you bring back more gold, allowing you to build up a keeptown in the castle’s hinterland. In the keeptown you can unlock and upgrade classes, improve your armour, weapons and spells (once you’ve found templates in the castle), all to expand the range of randomly-generated heroes each time you die. You can also lock down the castle, so you don’t have to keep dealing with the horror of its randomness.

As a PDL, the game is bollocks-tough. I’ve wiped out generations of a family in moments, running into the labyrinth only to land for the umpteenth time on a spike or fail to kill the same boss for the hundredth time. 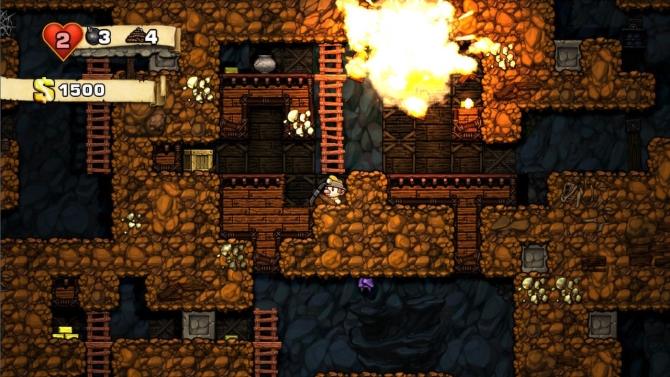 If FTL, was the brash space captain that necessitated the definition of PDL, Spelunky was the quiet archeologist exploring PDLs without praise. It’s proc-gen and features permadeath (roguelike), but also real time and allows players to unlock progression (PDL). It’s been around as freeware since 2008, when FTL was a mere twinkling in Justin Ma’s Kirk obsession, but was polished up for commercial release in 2012, then ported back to PC in 2013.

Spelunky is a horror of a game. It looks so cute, with its hydrocephalic hero bravely entering a platform cave system in search of treasure, but it rapidly morphs into a PDL. With a whip, ropes and a fancy hat, how can you fail?

Easily. On your first attempt, you’ll probably die on the first level of the mines. Get further and you’ll realise quite how horribly deep and involved this game is. I’ve never got past 3.1, but if you put a thousand hours in like the members of the sadly-defunct Spelunky Explorers’ Club (http://spelunkyexplorersclub.com/), you too can fight Osiris, get reincarnated, and die for the thousandth time from being knocked onto spikes by a spider you didn’t spot. The daily challenges only make your (my) failure worse.

Crypt of the Necrodancer 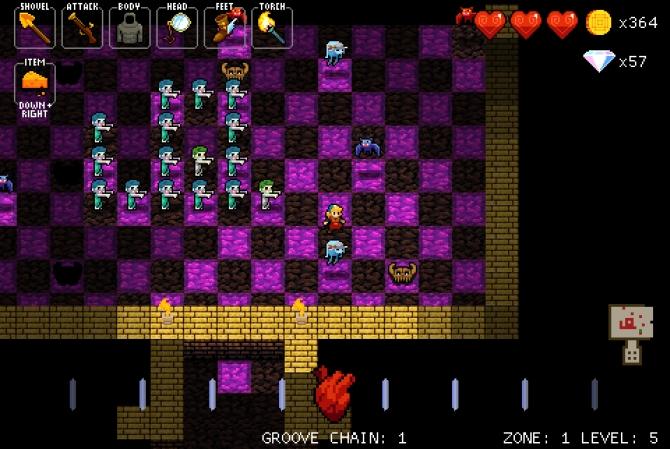 This is new, so I haven’t had a chance to play it. I’m also terrible at rhythm games (and if you want to know how good I am at the rhythm method, the baby’s due in October), and it’s a rhythm PDL.

If, however, you do have rhythm (and who could ask for anything more) and possibly a dance mat, then this is the game for you. It’s a fairly standard dungeon-diving roguelike – indeed, it’s so much a roguelike that I’m loathe to put it here.

The twist is that, unlike a normal roguelike, you have no control over the game time. Each turn is done according to the beat, whether of the in-game music, or one of your own MP3s (it’s reportedly much less effective with indie music. And forget about Jimi Hendrix). Enemies have their own quirks so that, whilst you’ll almost certainly die a fair few times starting out, the knowledge you’ll gain will allow you to cope, even with the basic kit. 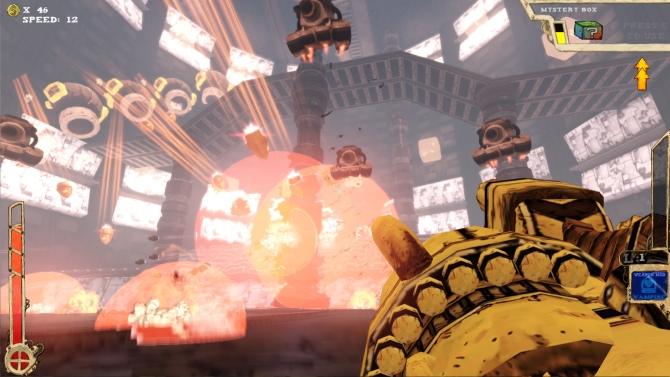 Tower of Guns has a nice twist in that it’s an twitch FPS with a proc gen world and weapons. (If you prefer a fantasy twist on this, go with Delver instead.) The creators describe it as The Binding of Isaac meets Doom 2, which is a nice simple description for us muggins.

What it does nicely, is emergent power-up combinations, like any good roguelike (see The Binding of Isaac). Pick up the right combinations and you can end up with mad multi-jumps, shotguns that fire rockets and the like. The developers (Joe and Mike) say their prime selling point is that it’s a game you can play in an hour and come away satisfied. So it’s a light snack, rather than a main course. 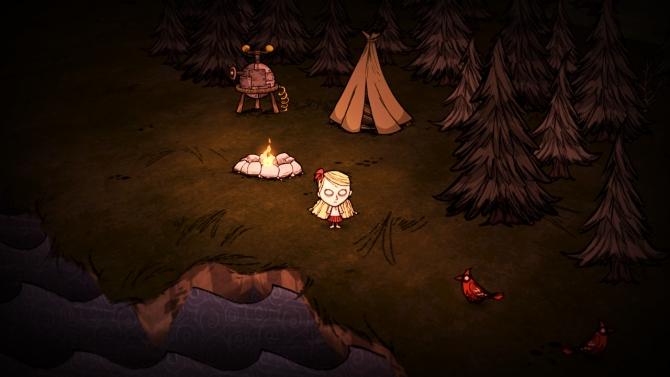 Oh, the joy. This survival sim mingles a fantastic Edward Gorey aesthetic with minecraft style crafting and terrifyingly overpowered monsters. Can I call it a PDL? Well, it’s a proc-gen world, with lots of death and that world makes for a cruel labyrinth to explore.

Like a Robinson Crusoe sim, you have to work out how to briefly survive in this strange flat world, build up your capabilities by foraging and farming the weird biomes, and discover your purpose in the world. The cruelness of permadeath isn’t far off at any stage.

The only problem with Don’t Starve is that it’s something of a feudal farming simulator, like being a peasant in Game of Thrones. Essentially, you’re trying your damnedest to survive, until some arrogant prick comes roving through your farm and kills you. If you survive that. well, winter is coming. 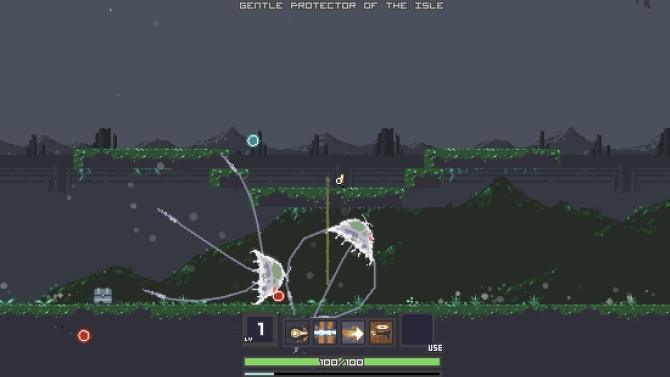 The action PDL par-excellence, Risk of Rain is a shooting-platformer, with a slight Metal Slug feel to it. Except that you’re roving all over this huge alien pixel world, fighting off innumerable bestial enemies, trying to power up, and then triggering a boss battle when you feel ready to move to the next area. Oh, and the longer you leave it, the harder the enemies become across the whole game, making the game a huge horrible gamble.

Players unlock more characters by completing arbitrary in-game challenges. It’s a highly skilful game, especially given the vastly-differing capabilities of the various characters. And they’re developing it all the time, with PvP and arena modes mooted.

The Binding of Isaac 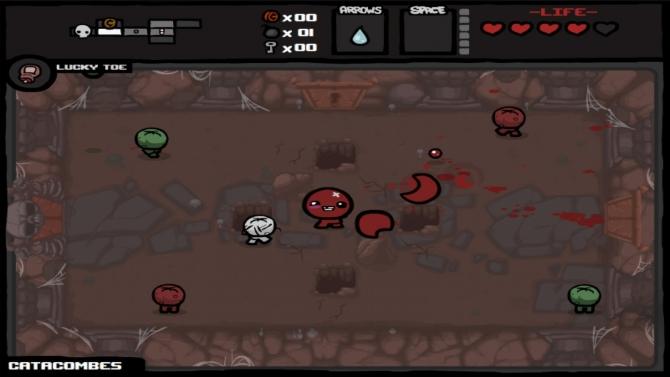 We all know Ed McMillen from his art, the way that making Super Meatboy almost killed him and we’re waiting with baited breath for his cat-breeding simulator Mewgenics, but it’s The Binding of Isaac that fits the PDL mould. It’s a top-down roguelike shooter with a range of horrible power-ups and -downs, and merciless boss fights at the end of every single level.

It’s almost a PDL in its storyline too, given the cruelty of it. Isaac, like his many brothers and sisters, is called for as a sacrifice to God, according to his monstrous mother. He must fight his way through and defeat her and then the DEVIL HIMSELF. It’s marvellously silly, gory and nasty. I mean, you fire tears at your enemies (who are mostly broken up baby parts like yourself.)

Like Risk of Rain, it’s being redeveloped because developers can’t leave well enough alone, I mean, because a new engine is much better. So you may want to wait for BOI: Rebirth to come along before buying it. 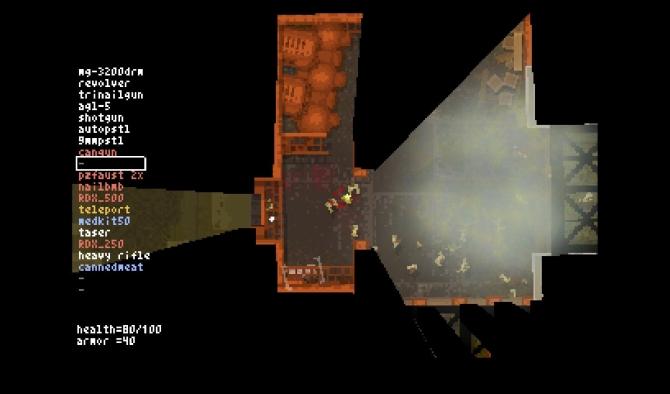 Like Isaac, Teleglitch is a top-down shooter. Unlike Isaac, it’s set in a Doom-like military base, with line of sight removing the fog of war. This makes levels horrible sprints or creeps, as you desperately try to find or craft a weapon to kill the thing that’s just behind you, and just find more chasing horrors.

It’s got the proc-gen, it’s got the twitch-based gaming, it’s got crazy-ugly-pretty pixel graphics – it’s only lacking an effective metagame mode (though I could suppose memorising the various recipes to craft new items in-game could constitute that.)